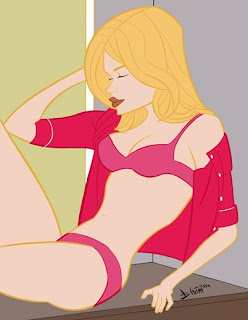 It's a good time for another Doutzen Kroes drawing so I did one.

I’ve been tagged by Alina Chau to post seven random facts about myself and then to tag seven other friends where they have to do the same.

1. Last week while talking with my buddy Mark Morales I said that I probably have hung out and know more black people than him (outside of his immediate family). He grew up in a part of Long Island that is 75% black and I grew up in the inner city of Indianapolis that was 98% black. Mark disputes my notion.
2. I saw “Before Sunset” before I saw “Before Sunrise.” I think “Before Sunset” is not only the stronger of the two, but also highly underrated. You don't see brilliant writing and acting like this often.
3. I’m dying to use the line, “You are a stone cold whore master,” in a conversation even if it is not in context, just because I think it’s cool and funny. The line is from the great David Mamet film “Spartan.”
4. I saw Miyazaki’s “Ponyo” yesterday (it’s pretty good, though not on a Mononoke level) and John Lasseter was in the audience (I didn’t go bug him).
5. For Hollywood, I’m represented by Endeavor which make me like three degrees from President-elect Obama (my Endeavor agents - Ari Emanuel - Rahm Emanuel - Obama).
6. I ink with a Raphael 8404 #3 sable brush, even though some people think I use Illustrator.
7. It takes me forever to think up character names when I’m writing so I mostly use athletes and old cartoonists names for inspiration.

Howard,
thanks for your comments about my work into my blog. You draw really pretty "pin-ups". Congratulations for it. See you!

Awesome stuff man, love the clean lines, thanks for the positive comment the other day :)

2) i did that too once, i also saw both takes on donny darko, i prefer the director's cut more sci fi than supernatural

3) you are a stone cold whore master-bater :)

4)that sukx about ponyo, the only one i like was mononoke

5)coool, i do that with the celebs i meet at sdcc, i've met so many i've lost track

7) i know another one that might help, use your friends, family, creator buds and ghange their names around

that's it out of me this time, now to see what erwin put

first of all the pages look awesum ,,,
n u hav such control over the brush ,GREAT!!!
before sunset is one of my fav too..
n
thanks for tagging other awesum talents:)

happy post turkey day, bro! just finished my random facts. now its time for me to get back into finally updating my blog. time sure does fly.

Hey Howard, cool that you stopped by my site, and even cooler to check out your work here.
I was gonna see Slumdog Millionaire tonight (sunday) at the Arclight but it was sold out, can you believe it's still selling out!?
Cheers.