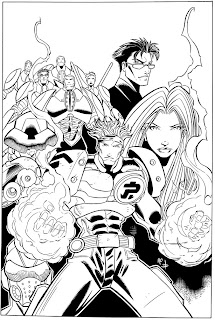 I finally finished inking this piece. It took me about 8 years to ink this Intrigue cover that my buddy Michael O’Hare penciled. The extreme time wasn’t because it was a particular difficult piece to ink, but because when I first started inking it, I realized that Intrigue would be delayed (three issues had come out at the time). I didn’t know it would be this long and the fourth issue still hasn’t come out.

Various things happened to cause the delay (changing penilers, FedEx losing art). Presently, I do have Intrigue #4-#6 all in pencils (it’s a 7-issue series). At some point (mostly because of all the problems on the book), I just felt a desire to do new things and so I moved on.

On and off during the past 8 years I would ink a few spots here and there on this cover. I generally like having more than one piece around when I’m inking just so that I can switch pages when one page has wet ink.

Francis Portela penciled most of the unseen issues and I have managed to put some of those pages to use. Those pages that I’m inking in my film “The Secret World of Comic Book Artists” are Francis’ Intrigue pages. My actors, Eric Weldon and AnnaLynne McCord, went fully into character and did some actual inking on those pages. Unfortunately their inking skills aren’t up to mine, so those pages are unusable now. Inking is mostly a mindless task (as any inker will tell you). You can talk on the phone and watch TV while doing it. But acting and inking at the same time is very difficult. Only skilled professions should attempt it and only under a doctor’s supervision and with the expressed written consent of Major League Baseball.

I do have photocopies of those film inked pages, so they can be recreated. I will also, one day, put out the completed Intrigue story and art.
Posted by Howard Shum at 3:43 AM