Zombieland and Batgirl (not related) 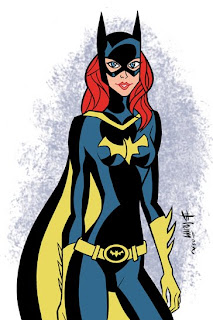 I saw "Zombieland" tonight. It's written by Rhett Reese & Paul Wernick and directed by Ruben Fleischer. If you want to have a good time at the theater, go watch this movie. It's funny and clever with cool visual action. I like the interaction between Woody Harrelson's badass zombie killer character and Jesse Eisenberg's nerd sidekick character. Amber Heard has an excellent cameo in the movie though I'm sure most people will be talking about a hilarious surprise appearance by an A-list celebrity. Go watch it before people spoil it for you.

Here is a drawing of Batgirl I did.
Posted by Howard Shum at 1:10 AM