If people made “best of” best of lists, my list would mock that. To present my annual awards here is a drawing I did of model Martha Hunt. 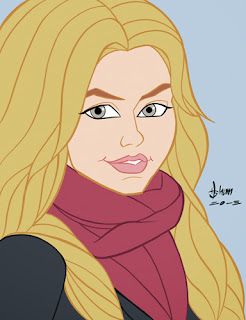 Film - “Gravity” Written by Alfonso Cuarón and Jonás Cuarón. Directed by Alfonso Cuarón. Gravity is why there is cinema. It is why no matter how large a television screen you have at home, it will not compare to the majesty of seeing this film on a huge theater screen in 3D. You can only get that immersive feeling of wonder in a cinema.

Director - Alfonso Cuarón “Gravity” Cuarón is a filmmaker who does not follow the easy route. He understands cinema, innovates, do things that are hard, takes chances, overcomes obstacles and all this shows in his storytelling.

Actor - Chiwetel Ejiofor, “12 Years a Slave” After watching this movie, you will feel as if someone punched you hard in the stomach which is how all dramatic movies about slavery should make you feel.

Actress - Sandra Bullock, “Gravity” The bulk of the movie is just her and she carries it well.

Supporting Actress - Lupita Nyong'o “12 Years a Slave” It is interesting that a British filmmaker and mostly non-American actors made a film about slavery in America that many would rather you think were happier times.

Breakout Performance - Brie Larson "Short Term 12" This is a powerful performance that is going to lead Brie to even more great roles.

Screenplay - “Before Midnight" by Richard Linklater, Ethan Hawke, and Julie Delpy. After extolling the visually cinematic virtues of "Gravity" how do I pick a film that is nothing but people talking as Best Screenplay? Because I know how difficult it is to make a good movie that is nothing but talking that's why filmmakers don't make movies like that. It's hard to shoot, write, and act in that kind of movie and when it is done exceptionally well, it must be celebrated.

Cinematographer - Emmauel "Chivo" Lubezki “Gravity” Chivo is the best cinematographer working today. The phenomenal long shots with great compositions in Gravity help add to its grandeur and tension. His work on Terrence Malick's "To the Wonder" is also something to behold.

Animated Film - “Frozen” Directed by Jennifer Lee & Chris Buck. Disney makes the most beautiful animated movies. Frozen had a nice story and songs to go along with its wonderful visuals.

Television Show Drama - "Breaking Bad" This stayed at a high level from start to finish. How many shows can say that? Very few, only the best, which this is.

Television Actress - Tatiana Maslany “Orphan Black” Tatiana plays a minimum of six characters on this show and she gives them each a distinct personality, voice, body language, and mannerism. It is impressive to watch.

Talk Show - "Inside the NBA" This show is never not entertaining. I'll watch even if I didn't see or care about the teams that played before it. It's fun hanging with Chuck, The Jet, E.J. and Shaq (and sometimes C-Web).

White Guy Speaking Chinese - Kiefer Sutherland “Jose Cuervo commercial” I’m pretty sure Kiefer Sutherland doesn’t know Chinese (Cantonese), but he speaks it with a perfect accent in this commercial. I have heard so many non-Chinese speaking actors mangle the language (such as Harrison Ford in “Indiana Jones and the Temple of Doom”. If I was on that bridge at the end instead of Short Round, after Indy yelled in Chinese I would have said back, “What the hell did you just say, Indy? You sound like you’re drunk.”) that I must point it out when done well.