A list of mine that seemingly appears once every year. My drawing is of Kirsten Dunst from season 2 of Fargo. My best of 2015 list: 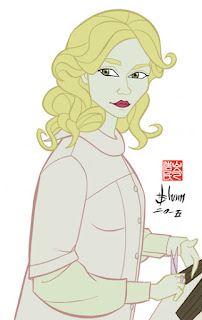 Film - “Son of Saul” Written by László Nemes and Clara Royer. Directed by László Nemes. A Hungarian Jew is forced to work in a crematorium taking out bodies and scrubbing floors during the Holocaust. He finds a body that he thinks is his son, whom he now determined to give a proper burial no matter what. This film is shot with mostly long takes and medium and close shots of the main character with long lenses which blur out the backgrounds. It’s an involving film of a poignant subject.

Director - George Miller “Mad Max: Fury Road” High intensity action with the accelerator pressed to the floor. No one did action better in 2015.

Actor - Märt Avandi “The Fencer” Some people just have brilliant looking faces just made for cinema. Avandi has such a face and the acting skills in this uplifting film about a school teacher with a secret past in Soviet controlled Estonia.

Supporting Actor - Michael Shannon, “99 Homes” Shannon is good at playing intense characters. This character could have been a cardboard bad guy, but Shannon is too good an actor to do that. It’s the system that is bad, and his character adjusts to that.

Actress - Brie Larson, “Room” This film could have been just sad and depressing, Larson has range so it’s more than that.

Supporting Actress - Günes Sensoy, “Mustang” Of the five sisters (set in an oppressive small town in Turkey), she stands out with her strong will and determination.

Screenplay - “Me and Earl and the Dying Girl” by Jesse Andrews. This easily could have been a schmaltzy type of teen dying movie that we’ve all seen before, but interesting characters (who do clever send ups of classic movies) and non-formula writing raises this film.

Cinematographer - John Christian Rosenlund “The Wave” This smart disaster film set in Norway and directed by Roar Uthaug (an amazing filmmaker you should all keep your eyes on) is beautifully shot by Roselund.

Television Show Drama - “Game of Thrones“ The story continues to be enthralling and the production values are feature film quality.

Satire - “South Park” After 19 seasons, South Park still does the best social satire in any medium.

Television Show Comedy “Rick and Morty” This show is full of creativity and fun. Most TV shows fall into route and predictability. Rick and Morty continues to surprise.

Television Actor - Rami Malek “Mr. Robot” Note to Hollywood producers: as a computer science graduate, I can tell you that guys who are extremely good at computers are not super buff hot guys like Chris Hemsworth and Hugh Jackman. Malek and the producers get it right on this show. This is the most accurate hacking show/movie I have seen out of Hollywood.

Television Actress - Kirsten Dunst, “Fargo” Fargo is great at using actors in parts we haven’t seen them do before. These actors almost always knock it out of the park such as Dunst in the second season.

Knock Out - Holly Holm. It’s so easy to root for nice people over ones who are jerks, full of hubris, have bad sportsmanship and won’t touch gloves. It was amazing to see the dominance Holm had over a less skilled Ronda Rousey.