I recently got to meet John Cena on the set of his upcoming movie "The Marine" (my buddy Paul Power storyboarded some of the action sequences). I think John has a good potential to make the transition to feature films. Most wrestlers carry their over-the-top acting that they do for live audiences in huge arenas when they do film or TV acting. John seems to know the difference and has properly toned it down in the few scenes I saw him act in. Looking at this photo, it's sad that putting both my arms together does not even match the size of one of John's arms. John is a cool guy even though he did body slam me into the concrete floor after this photo was taken. 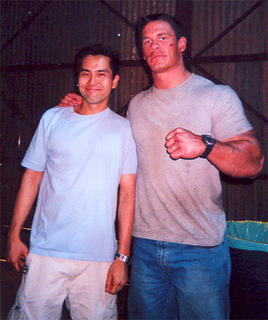