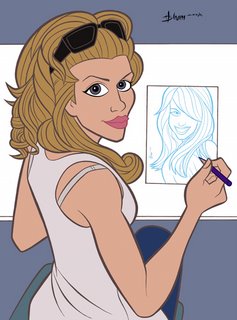 I have seen the best young actress currently working in film. AnnaLynne's acting is natural and she makes it seem effortless. It is said in basketball that a sign of a great player (Michael Jordan, Larry Bird, Magic Johnson) is that he can make bad to mediocre players better than they actually are. I have witnessed AnnaLynne's ability to do this with fellow actors. I think she can make any film better with her presence.
Posted by Howard Shum at 2:34 AM

Great drawing and a fresh angle! Hope she sees this!

heya, Howard! I'm very pleased to see your wonderful drawings as well as your amazing inks. hope ya had a great birthday celebration.

Great drawing! I agree with you, she's good!