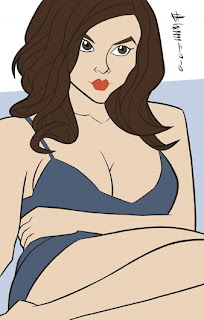 My favorite new show on TV is "The Inbetweeners" on BBC America. It's about four British high school losers who can't score. The lads swear like crazy and are homophobic (which apparently most British people are like). It's funny and clever. Kacey Barnfield only has a bit part as one of the guy's sister. I did a drawing of her instead of them because I didn't feel like drawing four dorky looking guys.
Posted by Howard Shum at 2:59 AM