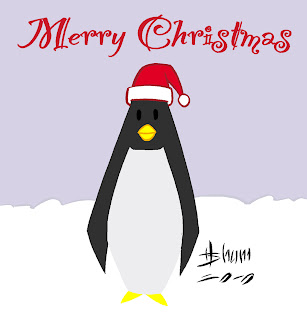 Merry Christmas, everyone!
Posted by Howard Shum at 4:47 AM No comments: 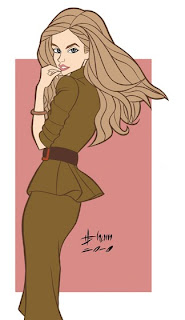 As the year closes, many of you wish that some all knowing comic book artist would make a list of the best of 2010. Rejoice, you wishers of simple things, for I grant you said wish.

Best Film - “True Grit” Written and directed by Joel and Ethan Coen based on a novel by Charles Portis. In the old west, a young girl seeks vengeance against the man who killed her father. Her allies are a one-eyed marshall who has seen better days and a blowhard who thinks he is cooler than he actually is. This film shows what it is to have extreme fortitude and determination.

Best Director - Joel and Ethan Coen, “True Grit” Few people can do intense drama alongside laugh out loud humor as well as the Coen brothers.

Actor - James Franco, “127 Hours” A guy is stuck in a rock for 90 minutes and the film is interesting. Kudos to director Danny Boyle and great performance by Franco.

Supporting Actor - Geoffrey Rush “The King’s Speech” I’m not a royalist and I like Rush’s portrayal of a guy who doesn’t kowtow to royalty.

Actress - Hailee Steinfeld. “True Grit” Some would have you believe that Hailee’s role was a supporting one, but it is fallacious. She is on the screen as much if not more than Jeff Bridges and Matt Damon. Her character instigates the action. It is a lead role and the 13 year old (at the time of shooting), first-time actor did a tremendous job and more than held her own with Bridges and Damon.

Screenplay - “Toy Story 3” by Michael Arndt, story by John Lasseter, Andrew Stanton, and Lee Unkrich. The story was surprisingly emotional. To be able to do that without doing easy obvious stuff, like killing a dog, is a great achievement.

Cinematographer - Robert Richardson “Shutter Island” The beautiful light, shadows and color add to the creepiness of this film.

Television Show Drama “Breaking Bad” There is no other TV show that has characters evolving and devolving like this one. Storylines venture into unexpected and dangerous territories that other shows fear to tread.

Television Show Comedy “Bored to Death” Crazy characters having crazy adventures in New York is funny to me.

Disney Princess - Rapunzel from “Tangled” Beautiful designs by the great Glen Keane and amazing animation by Disney (which is more gorgeous and ambitious than anything Pixar and Dreamworks have done) makes Rapunzel my new favorite Disney princess (sorry Ariel).

Face - Barbara Palvin. She has perfect eyes and lips. She should model. Oh, she does. The drawing here is one I did of her.
Posted by Howard Shum at 3:05 AM No comments: 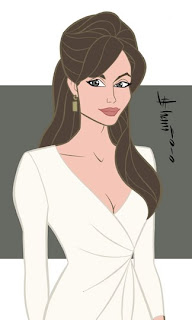 Here is a drawing I did of Angelina Jolie.
Posted by Howard Shum at 3:35 AM No comments:

Star Wars: The Clone Wars - Rise of the Bounty Hunters 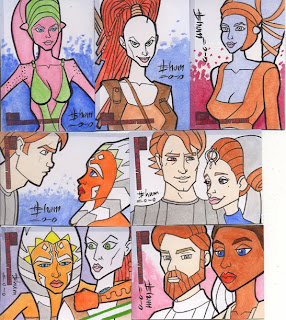 I did sketch cards for Topps' Star Wars: The Clone Wars - Rise of the Bounty Hunters set. Here are the ones I get to keep. E-mail me if you would like to buy one.
Posted by Howard Shum at 11:52 PM No comments: 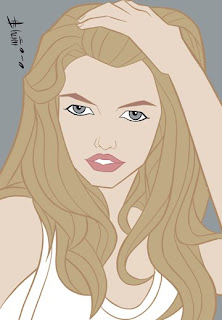 Here is a drawing I did of model Hailey Clauson.
Posted by Howard Shum at 3:42 AM 5 comments: 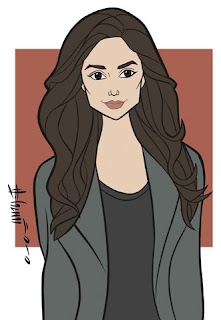 Here's a drawing I did of actress Janet Montgomery. Watch her on "Human Target" on FOX.
Posted by Howard Shum at 1:58 AM No comments: