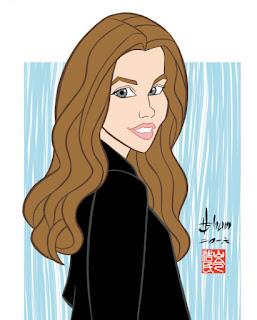 Film - “Nocturnal Animals” Written and directed by Tom Ford. It is said it is difficult to show the process of writing on screen. That may or may not be the case. If you are interested in seeing how art is made and the act of creativity, watch this film for Tom Ford shows you that. Using three storylines (one of which is a novel written by one character and read by another), we see how acts in life affect the writing of the book. The book itself is gripping and intense, making the whole a work of art.

Actor - Viggo Mortensen “Captain Fantastic” Mortensen is great in Matt Ross’ brilliant and original film about a father who raises his kids off the grid in the wilderness and now has to take them to the “real world” on a specific mission.

Supporting Actor - Aaron Taylor-Johnson , “Nocturnal Animals” While watching this amazing film I wondered who was the actor portraying this savage villainous part. I was surprised that it was Taylor-Johnson whom I’ve seen before. He was brilliantly unrecognizable in this.

Actress - Kate Beckinsale, “Love & Friendship” I have never read Jane Austen’s Lady Susan (which is what this movie is based on), but if it is anything like the performance by Beckinsale, it must be funny. I would like to see her do more comedies.

Supporting Actress - Adriana Ugarte, “Julieta” She plays the younger version of the title character in Pedro Almodóvar’s movie. She goes through her young life carefree and not realizing some of her decisions will lead to much sadness for her older self.

Screenplay - “The Handmaiden” Screenplay by Jung Seo-Kyung and Park Chan-wook, based on a book by Sarah Waters. This is set in Japanese occupied Korea in the 1930s and is about con artists and devious people. Twists and turns abound.

Cinematographer - Natasha Braier “The Neon Demon” Before I saw this film, a stranger sat next to me at a movie theater (about to watch a different movie) and felt compelled to tell me The Neon Demon was the worst film she saw this year. A good friend of mine whose option I value much also told me the same thing. It made me want to see it more. While it’s not as bad as they say it was, it’s also not the best in filmmaker Nicolas Winding Refn’s oeuvre. I thought it was a funny movie (although I was the only person laughing in the theater) and it’s also a beautiful looking film.

Documentary - “The Eagle Huntress” Directed by Otto Bell. If you like watching movies and like feeling good afterwards, watch this amazing documentary about a spectacular girl.

Television Show Drama - “Game of Thrones“ The story continues to be enthralling and the production values better some feature films.

Television Show Comedy “The Good Place” The premise of the show is that a woman who was supposed to end up at the “bad place” when she died, instead accidentally ends up at the good place. Most shows with these types of premises (like Gilligan never getting off the island) milk it out for several seasons, but pleasantly surprisingly this show moves the story along quickly and does not drag.

Television Actor - John Turturro “The Night Of” This unkept lawyer with feet problems who does his best to get his client off was very interestingly played by Turturro.

Television Actress - Rhea Seehorn “Better Call Saul” As we see Jimmy McGill slowly descend into Saul Goodman, we also see Seehorn’s character Kim along the way but stopping short of following him into that descent of corruption.

Knock Out - Joe Smith Jr. vs. Bernard Hopkins. Sure it was against a 51-year-old, but no one else has ever knocked out Bernard Hopkins and this was through the ropes! It was spectacular to watch.

Posted by Howard Shum at 3:20 PM No comments:

Here’s a drawing I did of Carrie Fisher as Princess Leia kissing Chewbacca. Saluté 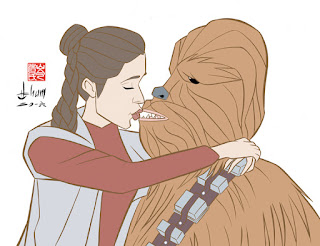 Posted by Howard Shum at 3:18 PM No comments: 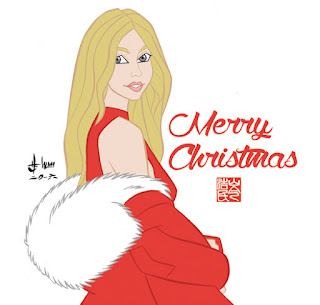 Posted by Howard Shum at 6:58 AM No comments:

Here’s a drawing I did of actress Angela Zhou. 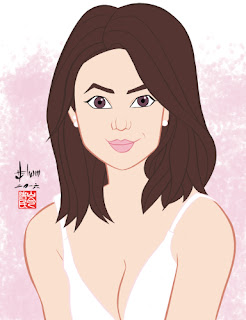 Posted by Howard Shum at 4:07 PM No comments:

Here’s a drawing I did of actress Jude Demorest. Watch her show “Star” on Fox. 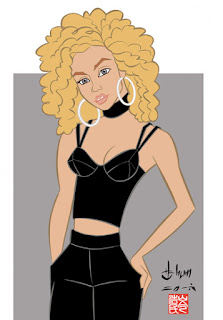 My friends and I went to the Game of Thrones Behind the Scenes Event in Los Angeles. Watch our video:

Here’s a drawing I did of model Gigi Hadid from this year’s Victoria’s Secret Fashion Show. 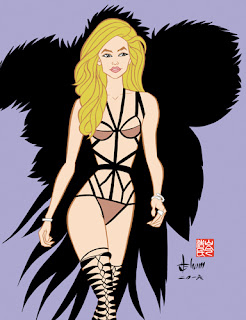 Posted by Howard Shum at 3:16 PM No comments: