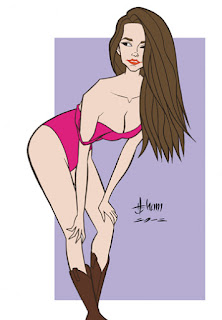 To present my award-winning annual awards here is a drawing I did of model Lauren Marie Young.

Best Film - “Cloud Atlas” Written and directed by Lana Wachowski, Andy Wachowski, & Tom Tyker based on the novel by David Mitchell. An ambitious film about redemption through not one but several lifetimes.

Best Director - Lana Wachowski, Andy Wachowski, & Tom Tyker, “Cloud Atlas” It’s easy to play it safe and do things that are recognizable and familiar. Visionaries take risks and are bold and do not go that route.

Actor - Joaquin Phoenix, “The Master” Damaged from his experiences in World War II, Phoenix transforms and commits into this role that few of his generation could have done.

Supporting Actor - Samuel L. Jackson “Django Unchained” I respect popular actors who have the choice not to play unlikable or in this case the most evil character in the movie, yet still choose to do so. Jackson does an excellent job in this film.

Actress - Jennifer Lawrence, “Silver Linings Playbook” She has a strong film presence and is versatile.

Supporting Actress - Jessica Chastain “Lawless” She appears to be one of those rare actors who can play any part imagined.

Screenplay - “Django Unchained” by Quentin Tarantino. Tarantino goes where none have dared and he does it with aplomb.

Cinematographer - Seamus McGarvey “Anna Karenina” Another film that went the unorthodox route. McGarvey made it look amazing with some incredible camera moves.

Television Show Comedy “Don’t Trust the B----- in Apartment 23” This is an insane show that is very creative. A lot of so-called TV comedies aren’t even funny. This one makes up for all those.

Rookie of the Year and Coach of the Year (NFL) - Andrew Luck and Bruce Arians of the Indianapolis Colts respectively. Before the season started, everyone said the Colts would be lucky to win 2-3 games this year. They pointed out that the Colts had a rookie quarterback and when Peyton Manning was a rookie he had a better team and he only won two games. Well this group of mostly scrubs lead by a quarterback who may one day be even greater than Peyton, exceeded those predictions and made the playoffs and with an interim coach at the helm. 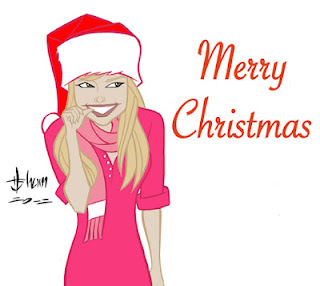 I did sketch cards for Topps' Star Wars Galactic Files set. These are the cards I get to keep. Send me an e-mail if you would like to buy any. 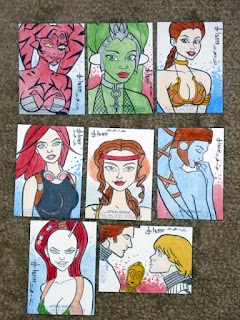 Posted by Howard Shum at 6:24 PM No comments:

Here is a drawing I did of actress Bella Heathcote. 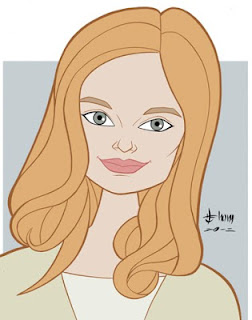 Posted by Howard Shum at 9:07 PM No comments:

Here is a drawing I did of actress Emma Roberts. 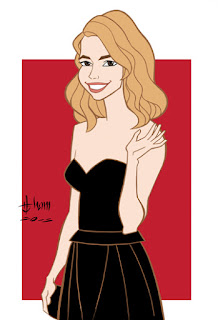 Posted by Howard Shum at 2:11 PM No comments: